WHY SHOULD I HIRE AN ATTORNEY?
I can obtain a negotiated settlement with No DMV demerit points in most cases. This can help to avoid insurance rate increases. I can often obtain a reduction of fine amount if the case has not already been adjudicated and set up payment plans with the courts for fines imposed. Fines are determined by the Courts on a case by case basis. Some citations can be dismissed completely. Avoid the frustration of standing in long lines at the courthouse. Have an experienced advocate appear on your behalf.

WILL I HAVE TO APPEAR IN COURT?
In most cases you will not have to appear in court. I can appear on your behalf and waive your presence.

WILL I HAVE TO GO TO TRAFFIC SCHOOL? Probably not. Unless you are charged with reckless driving or a hit and run accident or are a repeat traffic offender. Justice court now charges a satisfaction fee to avoid traffic school.

I WAS IN AN ACCIDENT AND WAS GIVEN A CITATION WHAT SHOULD I DO?
It is important to fight the citation in a case like this. It is possible you could be sued for causing the accident and if the case if not handled properly, the fact that you were convicted in Court for a citation could be used against you. Your insurance rate may also be raised. Call my office at 382-9307 to discuss this matter.

I WAS CITED IN A TRAFFIC ACCIDENT BUT IT WASN’T MY FAULT CAN I STILL SUE FOR MY INJURIES AND VEHICLE DAMAGE?
Yes, but see above. It is important that the citation you were given be handled properly. I can also handle your injury case. Call my office today at 702-382-9307 for a free consultation. 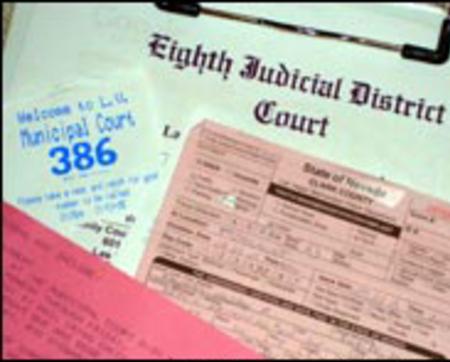 Avoid the long lines at the courthouse. by hiring me.

In Nevada, the Department of Motor Vehicles keeps track of traffic violations that result in court convictions using a system of demerit points. If a person is found guilty of a traffic violation the court will notify the DMV of the violation. The more serious the violation the more points are assigned. If you receive 12 or more demerit points in a calendar year your license will automatically be suspended for 6 months. The intent of the point system is to identify dangerous drivers and penalize them accordingly. Insurance companies also use this information to raise insurance rates.

In most all cases I can have your your citation amended to a parking violation without any demerit points and you will not have to attend traffic school. Why? How? The traffic courts in Las Vegas are very busy. They also need to generate revenue as cost efficiently as possible. If everyone took their traffic case to trial the system would come to a grinding halt. The courts would have to schedule each trial utilizing court staff and a marshal. The prosecutor would have to present the case. The police officer would have to attend trial. This would take the officer away from other police duties. In order to deal more effectively with attorneys, the courts and prosecutors will often agree to reduce traffic citations to non moving violations in a plea bargain. However, if you believe you are not guilty of the offense I can plead not guilty for you and take your case to trial. Contact me and we can talk about it in person. I am always willing to go to trial if that is in the best interest of the client. However, you should know that going to trial will often cost you more money for attorney fees then making a plea deal. If you are found not guilty at trial you will not have any fines or points assessed against you.

Anyone who has ever stood in line at the Regional Justice Center knows how busy the traffic courts in Las Vegas are. Chief Justice of the Peace Ann Zimmerman explained in a newspaper interview that Las Vegas Justice Court processes 250,000 traffic citations each year. Given that volume the court is hard pressed to process cases quickly and efficiently.

“If you’re a good driver and this is your first speeding ticket in 10 years, I don’t have any heartburn over giving you a parking ticket,” Zimmerman said. “The county is still receiving its revenues, because we collect a lot of revenue over the year. If everyone wanted to have a traffic trial, I don’t know how that would be possible.” See, Las Vegas Review Journal, June 20, 2010. The courts are now exploring setting up a system to deal with repeat and chronic traffic offenders.

Some of the traffic courts in Clark County are still not courts of record. This means that if you go to trial, the trial is not being recorded by a court reporter or recorder. Because there is no record, if you appeal following such a trial, you are automatically entitled to a brand new trial in District Court. For example, North Las Vegas Municipal Court is not a court of record. I once went to trial for a client in North Las Vegas Municipal Court on a traffic citation. The court found the client guilty at trial. We appealed the conviction and had a brand new trial in District Court where the client was found not guilty.
Offenses and Point Values